The Zombies at Kaaboo

The biggest music event of the year, the KAABOO music festival, returns September 14-16 to the Del Mar Fairgrounds.

Now in its third year, the three days will mix music, comedy, food and art for the ultimate summer- time San Diego experience. There are many things that make KAABOO special but top pf the list has to be its well curated talent lineup that includes a mix of modern and classic, with Foo Fighters, Katy Perry, Imagine Dragons, Robert Plant and Earth, Wind & Fire amongst the dozens of artists taking part. One of this year’s highlights will be an appearance from one of the most influential bands of the 1960’s, The Zombies.

Best known for their hits, “She’s Not There,” “Tell Her No” and “Time of The Season,” the band never performed in San Diego during their initial run in the sixties, but they have been regular visitors since their 2004 return. “I always remember San Diego as a breathtakingly beautiful city where the sun always shines and the people really love their music!” said singer Colin Blunstone, who fronts the band alongside founding member, keyboardist Rod Argent. “It’s definitely a favorite destination for The Zombies.”
While many of their contemporaries have long since become an “oldies” act, living on past glories, the band continues to push forward. “The Zombies always concentrate on the future,” Blunstone said.

“It’s writing, recording and performing new material that energizes us and drives us to continue touring all over the world on a regular basis.”

The band’s latest album, Still Got That Hunger, continues their legacy of ultra-melodic gems, full of radio friendly songs such as “Now I Know I’ll Never Get Over You” and “Moving On.” “The album was produced by the brilliant producer Chris Potter, who made the whole process one of the most enjoyable studio experiences I have ever been involved in,” Blunstone said. The Zombies started the recording process well prepared. “We decided to rehearse extensively before we got to the studio in much the same way as we did when we made ‘Odessey and Oracle’ in Abbey Road all those years ago,” he continued. “This meant we had already established material, arrangements and keys before we got to the studio and we’re really only looking for that special performance.” The band’s hard work has paid off. “We were absolutely thrilled to make the Billboard (charts) for the first time in many years!,” he said. 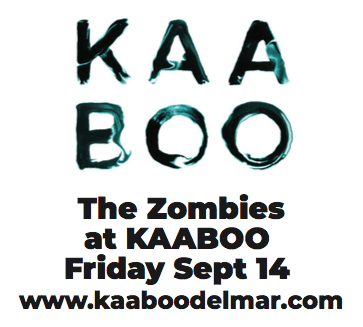 The Zombies have inspired a legion of perform- ers in their wake, with their songs covered by dozens of artists and pop culture status secure. In 2004, the band Phantom Planet portrayed the Zombies in NBC period drama, American Dreams. “It was a very strange experience (seeing that),” Blunstone said good-naturedly. “Very interesting, but also a little unsettling.” He cites Santana’s “She’s Not There” and Tom Petty and The Heartbreakers’ “I Want You Back Again” as his favorite Zombies covers. “I am constantly surprised at how many bands name us as an influence, especially as I thought we had been completely forgotten for many years after the band (originally) finished in 1967.”
The Zombies set list at KAABOO will take in songs from The Zombies, as well some of Blunstone and Argent’s solo hits. “Although I make suggestions regarding the set list, to a large extent it’s made up by Rod,” Blunstone said. He notes that at times the set list can be a surprise even to the band. “Like the rest of us, his eye sight is not what it was and he some- times mis-reads the set list on stage which keeps us on our toes as we’re never absolutely sure what the next song is going to be!” Fans will be happy to hear both Blunstone and The Zombies are working on new material.

“I am deliberately not naming any kind of release date (on my album) so as to avoid any kind of last minute panic to meet deadlines,” he explained. “All I’m saying is that it will be finished when it’s finished!” Meanwhile, The Zombies are just starting to write songs for their next release. “Taking into account our extensive touring program in 2018 and 2019, I can’t see it being completed much before 2020,” Blunstone said.
Busier than ever, The Zombies KAABOO performance is part of a world tour that will keep them on the road through November. Even after five decades Blunstone looks forward to his time on the road. “There is a unique bond between an artist and their audience, that can empower an artist to heights they could never reach on their own, almost like an out of body experience,” he mused. “When a show has gone well, there is an extreme feeling of exhilaration and fulfillment, like a drug driving you on to your next “live” fix,” Blunstone said.
Facebook
Twitter
Pinterest
Email
Tumblr
Previous articleHOW TO REINVENT YOURSELF, OR LAUNCH YOUR CURRENT CAREER TO THE NEXT LEVEL WITH A SIX FIGURE BOOK DEAL!
Next articleMechanical Musicians has taken a Human Captive
LUM newshttps://localumbrellanews.com

By Bart Mendoza It’s no secret that San Diego’s current music scene is thriving. That success, however, comes through the...