The Nice Guys Announce Debra Reed as 2018 Nice Guy/Gal of the Year.

Nice Guys will be honoring the Nice Guy of the Year (NGOY), Debra Reed at their 39th Annual Gala this fall.

SanDiego–TheNiceGuys, a local non-profit 501(c)3 organization,will honor Reed at their 39t​h annual major fundraising gala. The event will be held at the Manchester Grand Hyatt on Saturday, October 27, 2018. Each year, the Nice Guys recognize someone who has given their time, money and support to help San Diegans improve their lives. The Nice Guy of the Year event is also a fundraiser for San Diego Nice Guys charities. This year, at the request of Reed, part of the funds raised will be given to Pedal the Cause for cancer research in San Diego and Rady Children’s Institute for Genomic Medicine. The remainder of the funds will be for Nice Guys projects and individual San Diegans who need a “one time” helping hand up to get their lives back on track. The Nice Guys Charity Committee identifies these cases throughout the year. “Every single dollar we raise goes to needy San Diegans,” said Gale Sostek, this year’s Nice Guy of the Year Committee Chair. Founded in 1979, the Nice Guys of San Diego is an all-volunteer nonprofit 501(c)3 organization of more than 150 men and women, with no paid staff. In 2017 they provided more than $750,000 to underserved San Diegans, including $160,000 by their Victory Fund in assisting military families. Their total charitable distributions now exceed $19 million with 100% of every dollar raised going to needy recipients. All Nice Guys operating costs are paid by its members. “We are privileged to have Debra Reed as our Nice Guy of the Year,” said Nice Guys President, Vincent Bartolotta. “ 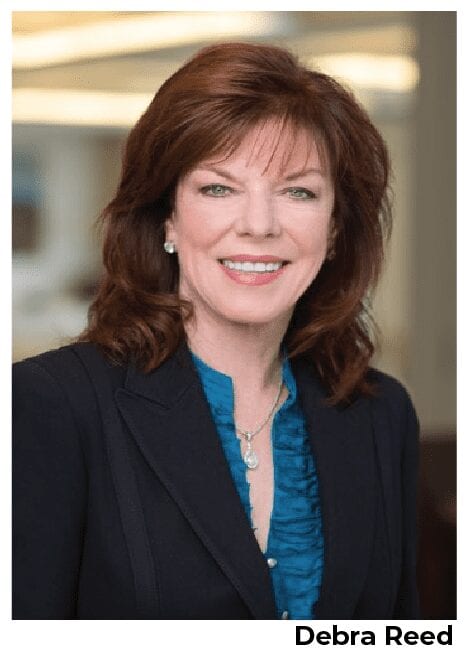 Her achievements as a businesswoman are matched only by her generosity for others in our community. She is a dedicated community leader who has been a long-time contributor to many organizations in San Diego. She exemplifies what the Nice Guys organization and its members are all about.” executive chairman of Sempra Energy, a San Diego-based Fortune 500 energy services holding company with the largest customer base in the U.S. The Sempra Energy companies’ approximately 20,000 employees serve more than 40 million consumers worldwide.
She served as CEO of Sempra Energy from 2011 to 2018, and as president of Sempra Energy from 2017 to 2018. Prior to that, she served in a range of executive leadership positions over the years after becoming the company’s first female officer within 10 years of joining the company. During her tenure as CEO, she ranked as one of 27 female chief executive officers of Fortune 500 companies and from 2011 to 2017, was recognized as one of Fortune magazine’s “Most Powerful Women in Business.” She was also recognized by Forbes magazine as one of the nation’s most influential female CEOs.
In San Diego, Reed currently serves on the Rady Children’s Hospital and Health Center Board of Trustees, Rady Children’s Hospital – San Diego Board of Directors, and on the Chairman’s Competitiveness Council of the San Diego Regional Economic Development Corporation, where she formerly served as chair. She has championed a number of major volunteer efforts in San Diego, including a Habitat for Humanity project, where nearly 1,000 employees built a two-story home for a wounded U.S. veteran and revitalized neighboring homes in northeastern Escondido.
She also served as co-chair of the USGA Pro-Am Golf Championship in 2017, an effort that netted over $200,000 for Pro Kids/ First Tee of San Diego and the Southern California Golf Association Foundation. And, for the third year in a row, she is team captain for Team Sempra/SDG&E at Padres Pedal the Cause, donating $300,000 in underwriting and raising more than $200,000 more for local cancer research institutions.
Reed has received many awards, including the “2018 Woman of the Year” from California Women Lead; a “Cool Woman Award” from the Girl Scouts in 2016; the “Distinguished Alumni Award” from USC’s Viterbi School of Engineering in 2013; and was named a Lifetime Laureate in Junior Achievement’s Business Hall of Fame in 2006, to name a few. Debbie graduated summa cum laude from the University of Southern California with a bachelor’s degree in civil engineering and lives in Rancho Santa Fe with her husband, Mark Klages. 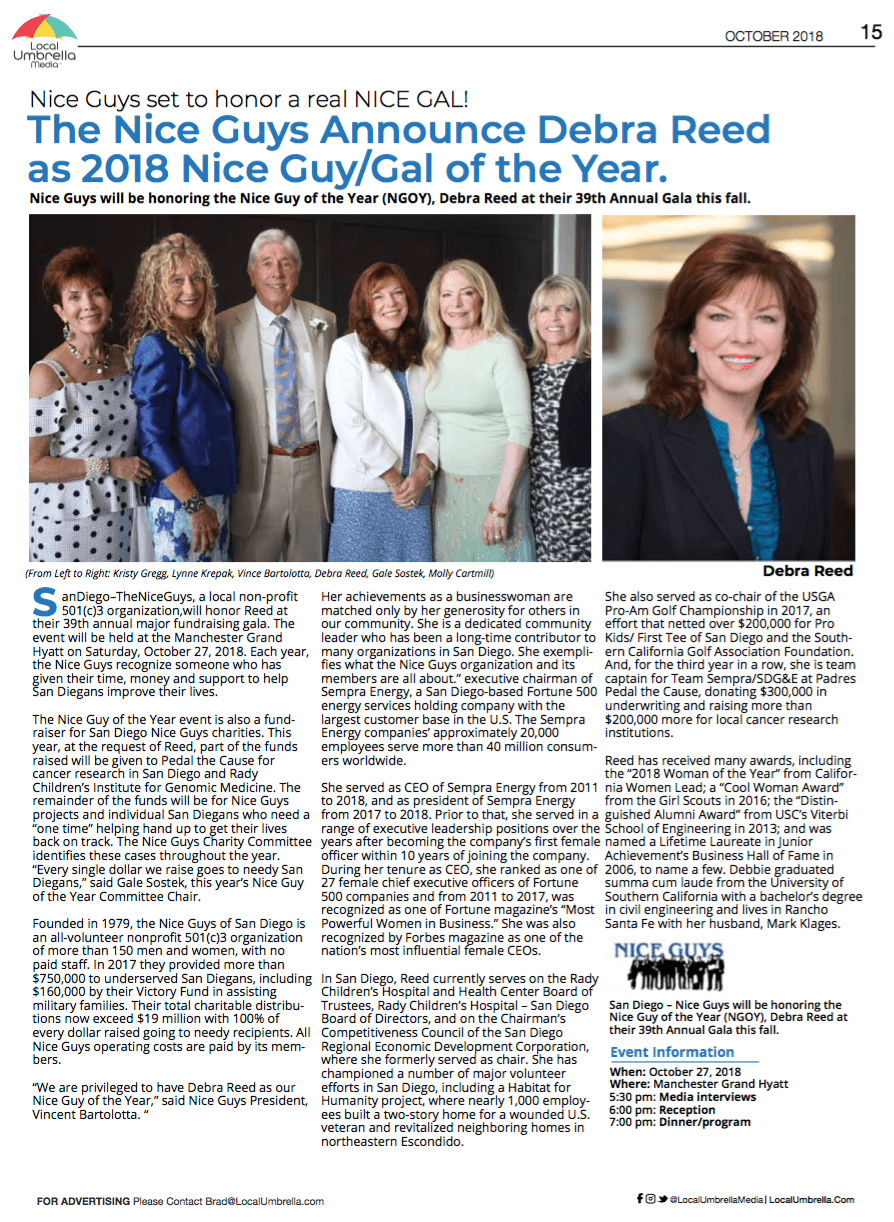