Tales From The Bar with Dallas Juanes 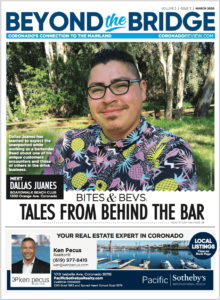 “You meet fun and amazing people working behind the bar.
And you get some crazies,” said Dallas Juanes, recalling when he politely declined serving a drink to an inebriated man, who then stumbled begrudgingly out of the bar, only to return two minutes later. Dallas was working at Pacific Standard in Downtown San Diego at the time.
“He was very scruffy, looked homeless, and thought he had walked into a completely different bar. I gave him some water and bar snacks, but I didn’t serve him alcohol.”
The following day Juanes had a Twilight Zone moment when the man returned with his family. “He was wearing a very nice suit I could only dream of affording. He looked respectable, and had no idea he was at my bar the night before. It was so strange.”
Signature drink: Juanes puts a tiki-style spin the classic old fashion, which he calls “Forager’s Dismiss.” It’s constructed with aged rum and smoky mezcal instead of whiskey, along with falernum syrup and bitters.
Share
Facebook
Twitter
Pinterest
WhatsApp
Previous articleTales From The Bar with Antonio Gonzalez
Next articleTales From The Bar with Marisol Lopez