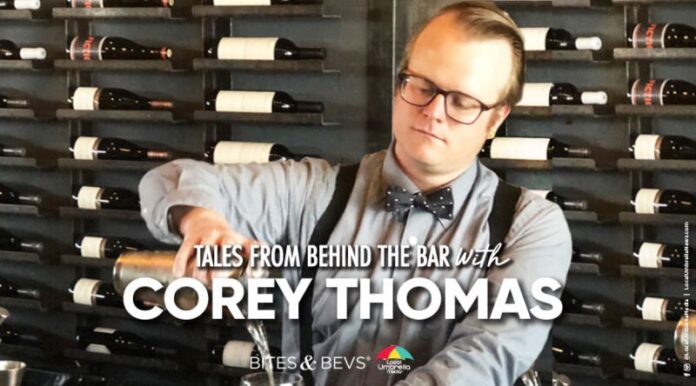 Tales From The Bar with Corey Thomas

If there is one profession that places its workers in ringside seats to the world, it’s the men and women who tend bars.
Much like psychiatrists, bartenders stand witness of a host of human behaviors, and they’re adept at listening to people with stories to tell. The only difference is that pulling the ear of a bartender is free, except for the money spent on whatever libations they sling.
We reached out to a handful of esteemed bartenders throughout San Diego to ask what customer interactions remain forever etched in their minds. 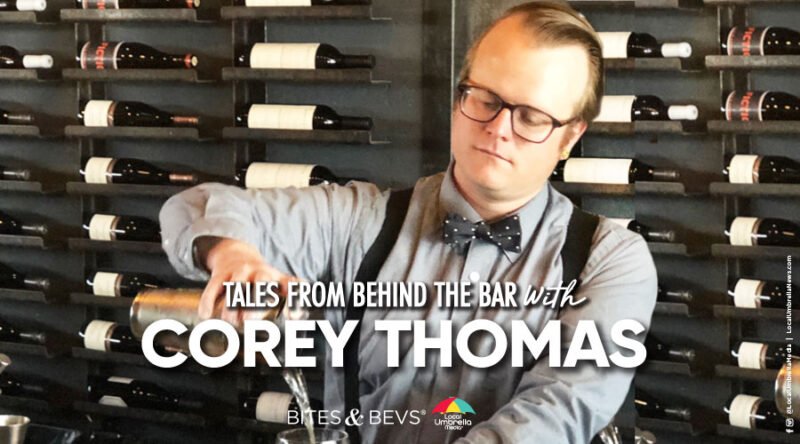 A quick imagination earned Corey Thomas kudos from members of a last-minute wedding-rehearsal party the restaurant hosted.
Thomas was tasked with little notice to create cocktails that jived to the bride and groom’s preference for white and green colors. The groom was fond of old fashions and the bride liked cosmopolitans.
For the former, he gave it a spin with syrup made from dried chrysanthemum flowers. He garnished it with baby’s breath so it had white and green coming out of the glass. For the cosmo, he used vodka, lime and white cranberry, garnishing it with a green carnation clipped to the edge of the glass.
“I had to drive to five or six stores to get the ingredients, including an Asian market in the Convoy district, where I found the chrysanthemums,” he said. “There were 25 people in the party and I sold more than 40 of the cocktails.”
Thomas’ newest libation: The “Ky-Tai,” which is an altered mai tai using charred pineapple-infused bourbon, lemon, juiced ginger, dry curacao and tiki bitters.
Facebook
Twitter
Pinterest
Email
Tumblr
Previous articleTales From The Bar with Pat Harrington
Next articleTales From The Bar with Christy Sons
Frank Sabatinihttps://localumbrellanews.com