Preparing For The Possibility Of Urban Wildfire 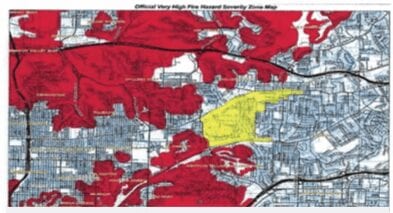 Chart: City of San Diego “Official Very High Fire Hazard Severity Zone Map” Grid 20. Rolando highlight added in yellow. (western border: College Avenue; eastern border: boundary with La Mesa; northern: El Cajon Boulevard; and southern: University Avenue). Area to the east of Rolando is in La Mesa and fire danger there is not displayed (Source:www.sandiego.gov/fire/services/brush/severityzones)
A recent article in Voice of San Diego (VOSD 8/14/18), “An Urban Wildfire Could Happen in San Diego,” addresses a topic of concern to all City and Rolando residents.
Because of our topography with canyons throughout the city and many older neighborhoods sitting on the mesas above the canyons, there is a very real risk of wildfires here. While we tend to think such blazes are more likely in newer neighborhoods built on the edge of natural environments, they can and have occurred in the city on numerous occasions.
The VOSD article mentions a recent brush fire in a canyon under the Vermont Street Pedestrian Bridge in University Heights. Five fire engines and a helicopter dropping water on the blaze extinguished the fire before it could reach homes on the rim of the canyon. Fortunately, the fire happened in the spring when conditions were less hazardous than they are at this time of year. Many would also remember the Normal Heights fire in June 1985, which started at the bottom of a canyon and quickly spread, destroying 76 homes and damaging 57 others. Witnesses described seeing 50-foot flames as the fire crested the canyon.
Then came the 2003 Cedar Fire. It began in the back country but quickly spread into the city and suburbs, destroying the Scripps Ranch neighborhood and encroaching on the Miramar Air Station. Pictures at the time showed flames burning along the runway. Children were evacuated from the Polinsky Center, near Clairmont Mesa Boulevard.
That fire generated so much smoke and ash that the area looked like it had snowed. I remember having to shovel several inches of ash from my yard after the fire was out.
In 2007 another fire raged, causing the evacuation of more than 500,000 county residents, including 200,000 City of San Diego residents. The communities of Rancho Bernardo and Poway were hit hard.
A link provided by the VOSD story to the City of San Diego Fire-Rescue Department https://www.sandiego.gov/fire/service s/brush/severityzones) shows the fire danger for Rolando and surrounding communities. Most of Rolando (shown in yellow) below is considered relatively safe. But it is surrounded by several Very High Fire Hazard Severity Zones. Areas to the east of Rolando are in La Mesa, and the map does not reflect hazard levels there. The area around San Diego State University is particularly hazardous due to the large number of steep canyons full of dry vegetation. A few months back, a fire in the Adobe Falls area spread quickly to the edge of Interstate 8, closing the freeway for several hours. The areas south of Rolando present another hazard. Flames and flying embers from a large fire there could easily reach Rolando.
Fire departments throughout the County are on high alert and have been attacking every small fire that ignites in hopes of avoiding a large conflagration. Even so, there have already been dangerous fires like the one that recently occurred in Alpine. With the official fire season beginning in October, it’s a good time to review your evacuation plans and prepare for the worst should we experience an Urban Wildfire.
What can you do to be ready in case of a mandatory evacuation? Have a go-bag with some essentials. I keep one in my car with a sweatshirt, hat,space blanket, water, toilet paper, pocketknife, comfortable shoes and a few energy bars. Have a folder with important documents ready to go. Keep a copy of your digital photos and documents on a cloud server and/or a removable backup drive for your computer. If you need to leave quickly don’t forget medications that you need, cash (ATMS and credit cards may not be working), food for any pets you may have, and other necessities that may not be available in a shelter. Be prepared to help your neighbors if needed, particularly any who need assistance walking or with medical equipment.
The County of San Diego Emergency Services website has plenty of information on what to do in case of evacuation including checklists and what to have in your ready bag.
www.readysandiego.org
Previous articleRCC HIGHLIGHTS: Activist Emily Pérez
Next articleWelcome Tina Gagne, RCC's New Secretary
Share
Facebook
Twitter
Pinterest
WhatsApp

How Is Rolando’s Voice Heard In City Planning Decisions?

By Laurel Grinnell-Wilson, for the RCC Board Periodically, we like to feature a Rolando citizen who stands out as an exceptional neighbor and committed community...
Read more
Newspaper

The California Center for the Arts, Escondido

The California Center for the Arts, Escondido The Art and Soul (and a little Rock...
Read more
Newspaper

Be Our Guest – Dr. Timothy Garofolo

To be updated with all the latest news, offers and special announcements.