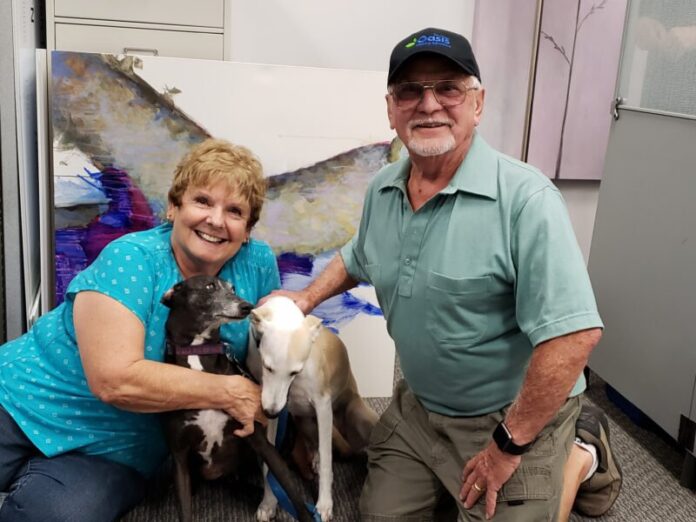 Their favorite word is “Yes”. Anytime we ask them to help us at Oasis, they always lend a hand. Whether it’s setting up for an event; speaking on behalf of Oasis; representing Oasis at Health Fairs around San Diego County; building gift baskets, soliciting businesses to donate giveaways, or delivering Oasis catalogs, they are always involved.

“I really don’t know what we would do without them” says Jolyn Parker, VP of External Relations for San Diego Oasis.
“Nadene and Don are such an important part of the Oasis family”

When asked why they do it, they each have an answer. Nadene says Oasis is family. “The people at Oasis are special and I love helping. We have always wanted to give back to the community”. She can’t imagine not rolling up her sleeves to do whatever she can. Don says Oasis “satisfies my soul and keeps me out of trouble”. In a recent video, Don expressed his concern that older adults can become lonely and find themselves without purpose. But, at Oasis, there is always something to do.

The Bruders have an amazing life story. Don, of Jewish heritage, was born in Naples, Italy in a monastery on December 25th (is that amazing or what?). His mom and grandmother lived and worked in show business in Gibraltar, but had to move to Naples where Don grew up during World War II. Moving to the United States in 1950, his family lived in Milwaukee, Wisconsin and later moved to Hollywood, California, ironically not far from where Nadene grew up, to try their hand at show business again.
As a young man, he relocated to Northridge, California, where he was a manager of a supermarket. Nadene worked next door in a beauty salon. Don saw her and said “what a cutie” and started to pursue Nadene. They were together for a year when Don decided he wanted to see some of the United States, so he set off in a Volkswagen bus and toured until he reached San Diego and in 1975, he stayed. He ran a landscaping business for 12 years before working for the State of California and ultimately for the County of San Diego doing environmental health services.
Don is also a Veteran of the Vietnam War. He and Nadene rediscovered each other one day on the street in San Diego. Don worked hard to win her back after not seeing her for a number of years and the rest is history. When asked what keeps them together, Don says its common interests while respecting each other’s independence. Don found Oasis while he was working at the County when someone introduced him to the Oasis Men’s Group in Mission Valley. He used to attend on his lunch hour. Says the camaraderie became a special experience, so he stayed and still attends today where he and his Men’s Club colleagues debate, talk, sometimes yell, and commiserate about the state of the world, and then shake hands and go to lunch.
He also takes other classes, especially anything technology. When Don is not at Oasis, he is at home tending his garden, his dogs and various other animals. In the past, he has raised chickens, bees, pigs, and turkeys. He and Nadene sometimes used to bring fresh eggs and jars of honey to the staff at Oasis.
Nadene was born in San Diego to a Navy family and then raised in Hollywood where she became a child actress from ages 4 to 14. Raised and schooled on the sets of MGM and other studios, her movie credits are long, including parts in Hans Christian Anderson with Danny Kaye, Bridges of Toko-Ri with William Holden and Grace Kelly, A Star is Born with Judy Garland, The Lone Ranger, Westward Ho, and many others.
Once she reaches teenage years, Nadene became interested in cosmetology and pursued her career, first by working in a Salon in the San Fernando Valley and then becoming a technical advisor to salons for Roux, a division of Revlon, which allowed her to fulfill her love of travel. Her very first overseas trip was in 1972 to Italy, France, Switzerland, Germany, and Austria. This trip broadened her perspective on life by witnessing how others lived and worked.
Eventually, she began teaching cosmetology in beauty schools and became an examiner for cosmetology boards. She is still doing hair and training people today when she has time. She and Don are involved in a number of charity organizations including On the Go for Jewish Family Service
(Don drives seniors who cannot drive anymore), Cancer Society Look Good Feel Better program, Meals on Wheels where they deliver meals when they can and Nadene does hair for TB patients. They continue to fulfill their love of travel; going on cruises to Panama Canal; Alaska and Japan as well as trips to New Zealand, Australia and most of Europe. Their most fascinating trip to date was to Israel. She takes various classes at Oasis also, including Soul Line Dancing which she seems to truly enjoy. 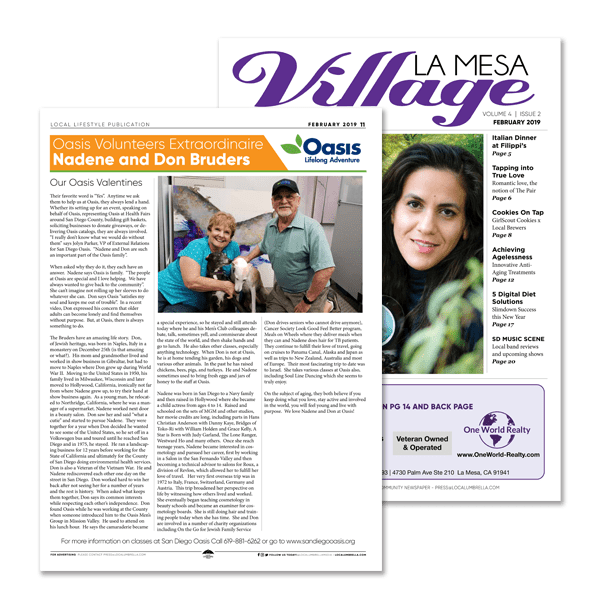