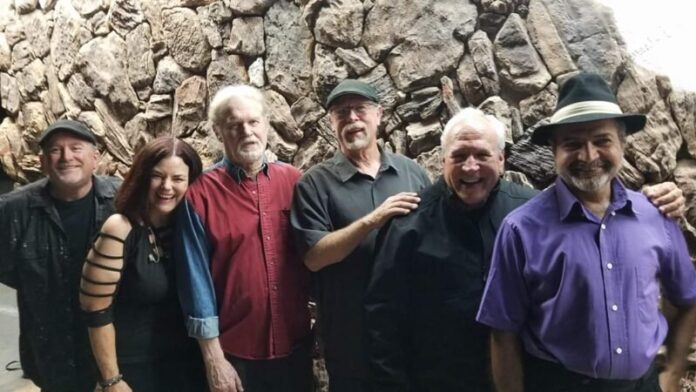 By Bart Mendoza
There are few musical genres as popular in San Diego as the blues. With numerous events and stellar players all around, it’s only natural that new bands emerge regularly, and one drawing particular attention over the last year and a half, is club and festival favorite, Manzanita Blues.
Unusually, Manzanita Blues came about because of another band not wanting to include blues songs in their set list. “I also sing with a rock cover band called the Dom Katz, which started out as a Rock/Funk/Blues band back in 2015,” explained singer Lisa Domkat. “But after a couple of personnel changes, we decided our focus should be mostly on rock and funk, so we started taking the blues songs off the set list.”
Having grown up listening to the blues around the Chicago area and then Charleston, West Virginia, where she was raised, she soon realized she missed those tunes. “Stuff like Buddy Guy, Billie Holiday, Koko Taylor, Johnny & Edgar Winter, Janis Joplin and ZZ Top. I found that I really had a longing to sing those songs. So, in the fall of 2017, I decided to go look for other like-minded blues musicians. I went to open mics around East County, met some really fine musicians and invited them to start jamming at my house.” It was at those rehearsals that the band name was born. “I live off Manzanita Road, so when we decided to form a band…”Manzanita Blues” was born,” she said.
Featuring Domkat (lead vocals & band leader/manager), Gary Orlansky (lead vocals & drums), Mike Van Duyn (guitar), Joe Monzo (keyboards), Darrell Richardson (harmonica), Rob Day (bass), Manzanita Blues is keeping busy with gigs all over the county, including Humphrey’s Backstage Live on Nov 12th & Dec 10th, and at the Landing on Nov 16 & Dec 21st.
Manzanita Blues specializes in covers, with a particular feel. “The key component to most of our selections is that they’re upbeat and danceable,” Domkat explained. “It’s not the kind of Blues that you would find in a quiet, smokey bar. It’s the kind of Blues that makes you want to jump out of your seat and dance! Our energy on the stage is always high which also energizes the audience and makes for an awesome party like atmosphere.” She cites songs such as the Allman Brothers “One Way Out”, “White Trash Girl” by the late great San Diego singer Candye Kane, the Jeff Beck version of “Ain’t Superstitious” and a version of the classic “Rock Me Baby,” as songs that really get the crowd going. “I think you have to feel the blues down in your soul, so even if you’re not the best player in the world, if you can convey the emotion that the songs require, then you’ll end up connecting with the audience,” she said.
Domkat notes that there’s so much room for interpretation and improvisation with blues music that a performer can make the songs thier own, but they are also beginning to write their own tunes. “We have recently started working on some original music too and hope to add some of those songs into the mix soon,” she said. “There are some venues in town looking to hire bands that play only original music and some that only want cover bands, Manzanita Blues is aiming on being a band that can do both. Once we get our originals polished, we’ll head for the recording studio and see what happens. If all goes well, we’ll have a finished product to submit to the San Diego Music Awards and some music worthy of representing San Diego at the International Blues Festival in Memphis. We have high aspirations but if none of that works out we’ll always be happy as long as we have a weekly gig,” she said good naturedly.
It’s clear that while the band has goals, Manazanita Blues simply enjoys making music. “The best thing that’s happened to us from the musical experience that is this band are the friendships and relationships that we’ve formed,” Domkat said. “We’re religious about weekly rehearsals followed by dinner. This awards us the opportunity to know one another as friends as well as musicians. We’re mostly not ego driven and although it’s great to get paid, we’re not in it for the money as much as the love of the music,” she continued. “If you love the music and have a dedication to your craft, our philosophy is that the rest will eventually follow.”
www.facebook.com/pg/Manzanitablues

By Bart Mendoza It’s no secret that San Diego’s current music scene is thriving. That success, however, comes through the...
Music Scene

KAABOO 2019 is now in the history books, with the sold-out, three-day event once again delivering an incredible experience...