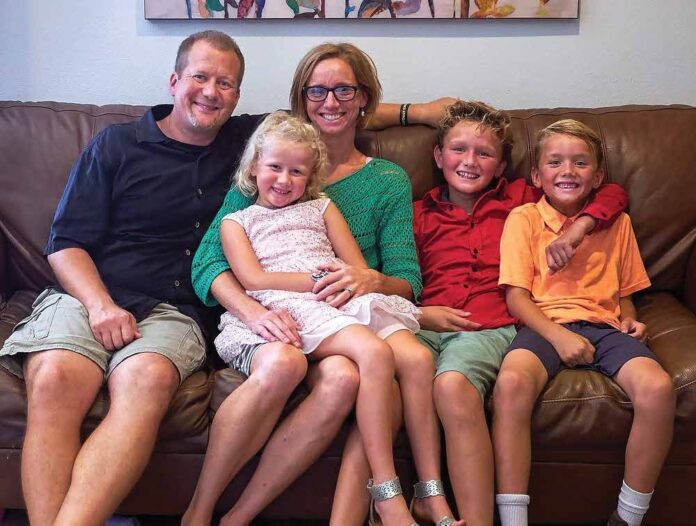 Angels Foster Family Network is a non-profit dedicated to providing safe, stable, loving homes for children in San Diego County. You can reach them at (619) 283-8100.

The Landis home is a busy place. It’s pizza night and six young children are all very excited about decorating sugar cookies for dessert. A basketball bounces across the family room, nearly missing a puzzle under construction. A light-up ball flashes. A toddler needs a snuggle. This is a typical Monday evening.

Angela and Nate have three children of their own: Russell, 10, Rocco, 8, and Allegra, 6, and three pet dogs. Added to the mix are three foster children, a sibling set of girls with the nicknames “Braveheart,” “Wheels,” and “Boom Boom,” who range from two to six years old.

The couple hadn’t planned on fostering siblings, but when their first placement’s sister needed a safe, loving home, they were asked to consider taking her. They liked the idea of keeping the girls together so they rose to the challenge – then did it again a few months later when they welcomed the third sister into their home. The first sister arrived in late 2017; all three have been with the Landis family since last June.

The couple says that fostering is hard work, but worth doing because they’re helping children in a way that’s very intentional and organized. “Angels has supported us beyond our expectations by providing training, a clinical case manager, and hooked us up with other foster parents,” says Angela.

They say they were also pleasantly surprised by how much fostering gave them as a couple and as a family. “There’s so much that’s terrifying, you’d think it would tear a couple apart, but it’s brought us closer together,” says Angela. She says her admiration for her husband has grown as she’s watched him keep his promises and step up to meet the needs of six children. Nate smiles and adds, “Six is more than a crowd. We had to band together.” As if on cue, Nate responds to a scuffle going on behind him. He doesn’t need to turn his head to know who it is, the two older girls, Allegra and Braveheart. “Try to be big girls with

that conflict resolution,” he tells them. “You’re smart girls with a lot of words.” Not missing a beat, Nate continues. “This is a challenge we are blessed to make. We have to make every moment count because we have fewer moments to waste.” Angela says that every evening after the children are all tucked in to bed, she and Nate sit together in a rare moment of quiet, and give thanks that they made it through another day.

Angela adds that not only has the couple’s relationship been enhanced by fostering young children, their three children have benefited as well. “It’s been hard and it’s an adjustment, but we also have built-in playdates and have had some incredible talks with our children about domestic violence and drug use,” she says. “They’ve also grown to really appreciate what we provide,” noting that things like consistency, safety, and food are often things children can take for granted.

Fostering is something the Landis family highly recommends to people who have room in their hearts and homes for children who need stability while their biological parents are given the time to get their lives back on track. “You just have to want to help,” says Nate. “You’re not saving anyone, you are providing safety and dependability for the season they are in.”

Michel Kripalani is President of Oceanhouse Media, Inc., a leading publisher of more than 650 mobile and desktop apps...
Family

A Family-Friendly Vacation Destination Legacy International Center provides something for everyone (Family Features) San Diego is an ultimate destination for family...
Family

Caring for Your Nutrition When Caregiving

Caring for Your Nutrition When Caregiving (Family Features) Family caregivers of people with illnesses, injuries or disabilities sometimes spend more...